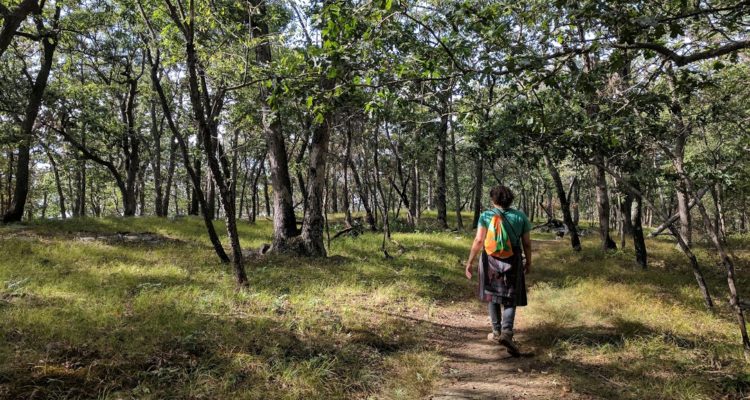 My friend and I decided to go for a hike on Friday since it was such a beautiful day and we were feeling the need for some exercise. In an effort to try something new, we decided to do the Osborn Loop hike in the Hudson Highlands State Park Preserve. This was a completely new experience for me since I haven’t done any hikes in this area before. After parking on Cross Rd, we walked back along the road and crossed over to start the trail directly across from the convenience store right at the light of rt.9 and 403.

The start of the trail was through a swampy meadow with a wooden walkway that freaked out the dogs a bit. I had to finally just pick up my little one since she kept falling off the walkway. This walkway ends quickly though and you are then in the trees.  It was a bit confusing to find the loop. You have to take the Appalachian Trail for a while to get to the start of the Osborn Loop, which is actually not even a full loop. We passed the Appalachian Trail at first and were walking on some nice wide rather easy trail that I must say I quite liked. I am kind of a wimp at times I admit. But after a few minutes walking in the wrong direction, we realized our mistake and turned around…of course that meant going up the super steep killer mountain which I really did NOT want to do, but I did it regardless.

Then at the top of the hill, we managed to find the beginning of the Osborn Loop. FYI, there is nothing much happening on this trail. It is a good hike for some up and down hills without fear of any rock scrambling. It was a very quiet, old-style forest that really gave one the sense of solitude…at least until you hit the gazebo. Yeah, there is some random gazebo out in the middle of the woods for some strange reason. We saw a small crowd of people around this place, and nowhere else on the hike. It was strange, very strange, but also kinda cool to have a place to rest like that out in the forest.

You can see many of these trails used to be old man-made carriage trails like the descriptions for this hike say, and my friend and I were having fun trying to guess how old they must be.

We read that this hike was 4 miles, but I am thinking that mileage must be from the start of the Osborn Loop. I don’t think it counts the walking from your car, through the meadow, up the mountain, and then back. My point of this is that we ended up walking way further than I am typically comfortable with. Before we were even finished with the Loop, I was tired and ready to turn around. We passed a yellow trail on the bottom end of the Loop that we thought about taking with the assumption that is was a shortcut connection to the Appalachian Trail. Not being sure, however, and not wanting to go further than necessary knowing we still had a few miles to go, we passed it by. For everyone’s information, that yellow trail DOES connect to the Appalachian Trail and it IS a shortcut! (saw that on the other side, after going the entire way around). It was OK, but going the long way around, we saw the trailhead for cutting into Manitoga which was cool. I will have to try that one on another day.

Another tidbit, if you get to the end of the Osborn trail and are not sure if you should turn around or take the Appalachian Trail back to close the loop, take the Appalachian Trail. It is faster and less hilly when you are already tired. An additional tidbit to remember, the Osborn loop and the Appalachian Trail are at many times, right beside each other, not even a 100 feet away I would say. So if you do get tired, you can just turn left or right depending on which trail you are on and walk a short way to find the other trial. This was at the top of the mountain on the part of the trail where you can just make out the Hudson river through the trees and it was very open under the shorter trees. The feature picture for this post was taken in this area. All in all, it was a good hike. At around 8 miles all in though, it was a LONG one for me, but maybe it will be just right for YOU. Enjoy.