Slide Mountain – Tallest in the Catskills 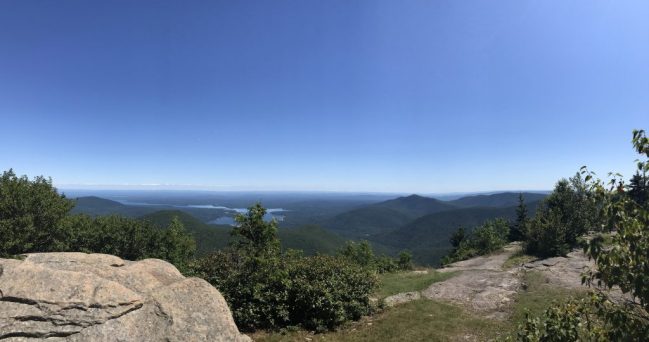 Roddy Pimentel on November 26, 2017 No Comments

Let’s get the particulars out of the way first.  Slide Mountain sits at 4190′ making it the tallest mountain in the Catskills.  This is the 7th of the Catskill 3500s I do and even though it was the tallest.  It turned out to be the easiest of the bunch thus far.

When I got to the parking lot that day, I was the only car there. So I would have Slide all to myself, and I did.  Apparently, there used to be a fire tower atop the mountain. That would have been a sight back then, a tower atop the tallest mountain.  Alas, it’s no longer there. This meant that after a quick climb the trail was pretty much the fire road that allowed vehicles to access the tower.  I opted to make it a bit more difficult for myself and veered off the fire road onto a trail less traveled.  The fire road is actually the Cornell/Wittenberg/Slide red marked trail, I would come down that way later on.  I walked another mile up and took the blue trail that afforded more of a hike, with a couple of great viewpoints along the way.  You also get to see an amazing natural spring where the water is literally just seeping out of every orifice the mountain has to offer.  The ground in the area is very mushy, and the sound of running water simply reverberates throughout the entire area.  You should definitely see the video. 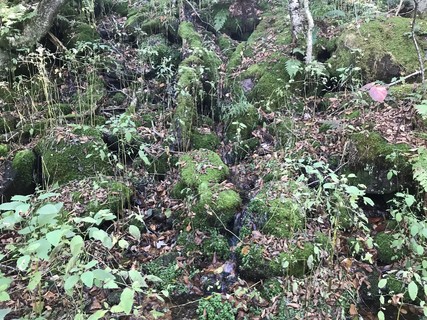 The reason to take the blue trail instead of the easier and quicker red trail is to get an actual workout and get the feeling that you are hiking instead of just walking up a fire road.  Also, for the spring mentioned above and two viewpoints not available on the Red Trail aka the fire road.  The first viewpoint affords some great views of Table Mountain.  You also get to see some amazing colors, mainly a reddish hue marking the ever-changing foliage of the Catskills as autumn gets into the swing of things.  The second, a clear-cut view of Table again, as well as Lone and Rocky mountains.  Here are those two viewpoints. 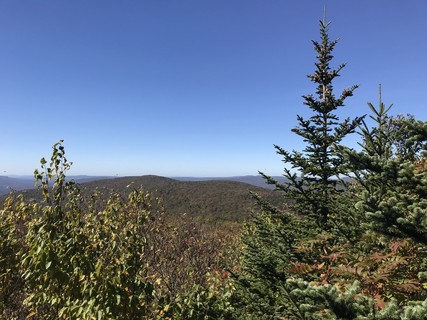 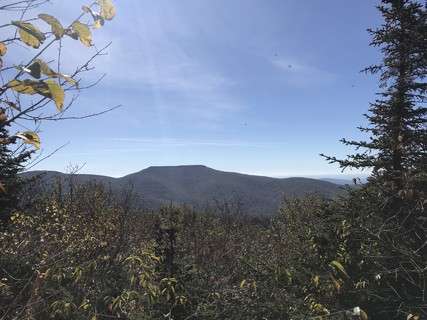 Eventually, the blue trail reconnects with the red trail and the aforementioned fire road which will lead us to the Top of Slide.  Before arriving at Slide though, you get to what the NY/NJ Trail Conference says is “the best view in the Catskills”.  I may have to disagree, but it is quite amazing.  You tell me: 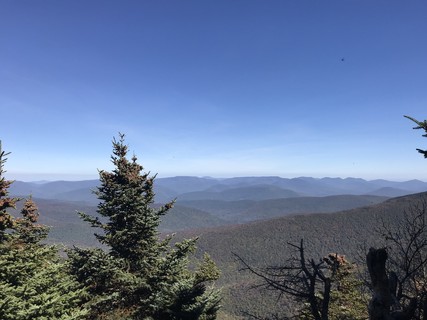 Another quarter mile or so, and we arrive at the top of Slide Mountain.  At this point, the elevation gain was maybe 1800′, yet I was standing at 4190′ above sea level.

After contemplating the height of my being at the moment, I pushed on past Slide to an overlook another quarter mile ahead.  Here, you get to see Cornell and Wittenberg in the distance with the Ashokan Reservoir just past it.  This is where I decided to sit and rest and enjoy the view while having a snack.  The video does this viewpoint more justice.

At this point, I still felt like I needed a workout.  I had only done about 1800′ of elevation gain.  So, I kept going to try and find another natural spring that was supposed to be a half mile past and what a half mile it was.  I started to descend at a pace that was scary since I knew I would have to climb back up later.  Some points were so steep there were some really steep stairs to assist. 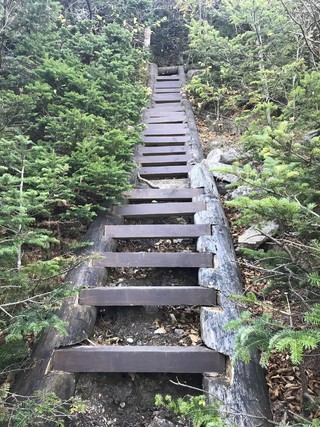 If I kept going a couple of more miles on this trail,  I would have gotten to Cornell, followed by Wittenberg.   After hiking close to 3/4’s of a mile without finding the spring, I turned around and climbed what I had just descended.  A total of about 500ft in 3/4’s of a mile.  Talk about a nice workout!  I sat on the ledge right past Slide again and just enjoyed the peacefulness of being at this point, at this time, without another soul in sight.  On a side note.  The author John Burroughs apparently introduced the world to Slide Mountain and he used to come up here to think and write. There is even a plaque in his honor on that ledge. 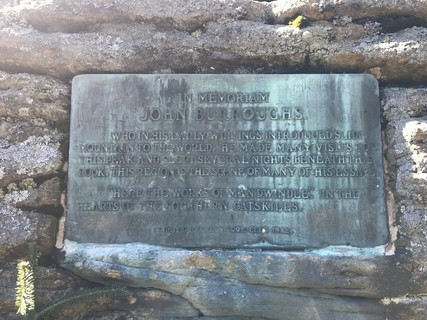 The way down was quick and uneventful.  I took the fire road down and the descent was at almost a trot.  In the end, the hike did exactly what it was supposed to do.  It gave me a spec of clarity when I most needed it, which is always welcomed.  I have not been back on the mountain for a serious hike since this one and I miss it along with the reflection.  Cuba and random weekends got in the way.  I will get back to it now that the temperatures are dropping and I am done with training for the Queens half marathon.  Nothing better than winter hiking to warm a cold world.

For a full gallery of photos and videos CLICK HERE.

“I go to nature to be soothed and healed, and to have my senses put in order” (Burroughs)

“A man can fail many times, but he isn’t a failure until he begins to blame somebody else.” (Burroughs)

“The smallest deed is better than the greatest intention.” (Burroughs)